Well here I am again! Back and ready to vandalize your computer screens with some more science 🙂 .

So, I have probably mentioned this before in another blog, but the first results are out! If you are a bit of a science nerd, you will know that there was a lot of publicity about projects which aim to reveal how our brains work. Well here looks like what is the start of it. The results of a multi-million dollar brain mapping project are out!!!

A few years ago there was the Human Genome Project which aimed to catalogue all of our genes – is that still happening? I’m not sure! Now we have the brain equivalent! A multi- million dollar brain mapping project called the Human Connectome Project (HCP) has aimed to map the human brain in greater detail than ever before. Nearly 4 years after its launch, the first results are starting to come in and it looks promising. Click on this Human Connectome Project link to visit their site.

Researchers have released a number of kaleidoscpoic images which show bursts of electrical activity produced by the neuron themselves. These images have been coloured so that you can see the electrical flow through the cerebrum. The images themselves look like an elaborate neon coloured hairpiece from the days of early punk rock. (It also reminds me of the last Coldplay concert I went to. If you saw their last tour you will know what I mean). 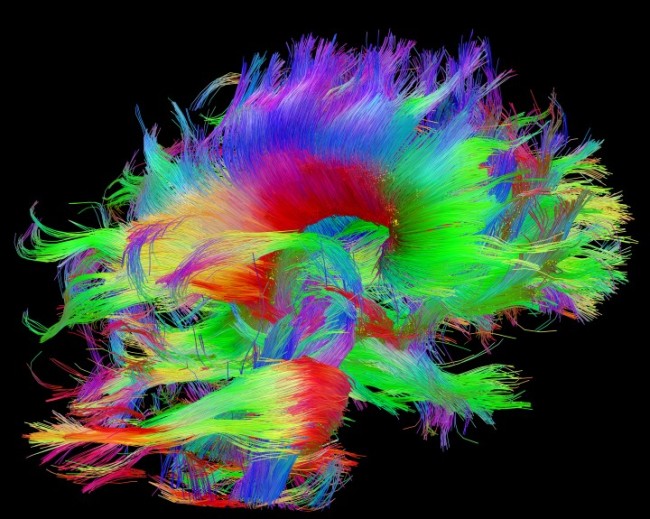 These amazing screen saver type images show the inner workings of our brains (and yes the image above is now my iPad screen saver 😎 ). One of the projects main goals was to map the long distance connections of neural pathways within the brain which make up the white matter tracts just under the cortex. The neuron bundles within the white matter are covered in a fatty like substance called myelin. In the past the fatty substance has been over looked, but the researchers on the HCP have observed these fatty coverings to be quite significant.

Over the last decade or so we have steadily moved away from the idea that one brain region is responsible for one action and more towards a vision of a brain with regions of multiple purposes which are richly connected to one another. Research is increasingly showing that our brains are a vast maze of connections, where activity in one region is propagated to other areas.

Assistant Professor JackVan Horn at the University of California (UCLA) is part of a team that have been tracing the long distance links using ‘diffusion spectral imaging’. Horn says that they have used an MRI scanner to follow water that naturally flows through the brain. He states that the water molecules diffuse more easily parallel to the fibres than across them. Thus following the path of least resistance reveals the route that the nerve fibres take.

Though this type of scan isn’t new, researchers on the HCP team have managed to supercharge their MRI scanner allowing super high resolution. They refer to the modified scanner as the Porsche of MRI scanners. Over the coming months the UCLA scientists plan to release their data to other neuroscientists to start the process of untangling the data from their 50 or so volunteers.

The end result of this $40 million project will be a multi-layered map of the brain (and i’m sure a very colourful one). The map will show the natural wiring of the brain and how it relates to one another. The map that we will receive will be the most detailed map of the brain to date. This is an important step for neuroscience as we have been bound by limited knowledge of how the brain works for many years. Van Horn says that this will provide a baseline that we can build upon and that baseline is fundamental.

Kris is a postgraduate (Cognitive Neuroscience) who loves to talk/rant about science. From the weird to the wonderful. Follow Science Rant for the latest in quirky science stories. Twitter: @krisfarrant Facebook: https://www.facebook.com/ScienceRant
View all posts by krisfarrant »
« Previous post